In an abundance of caution and at the direction of NC State University and Governor Cooper's safer at home recommendation, the Arboretum will remain closed until further notice. Check our Web site for online learning opportunities and re-opening updates.Learn more.

We've revamped the schedule of our second annual Southeastern Plant Symposium and created an online symposium to help us and our participants to slow the spread of COVID-19. Our originally scheduled 2020 speakers have been invited to join us in June 2021 and we've invited a new lineup of outstanding speakers. 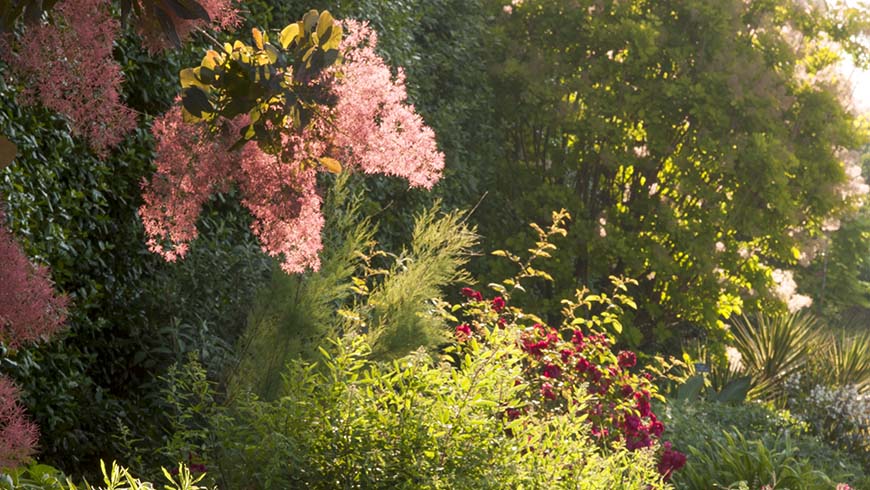 Crevice gardening is a gardening style that defies logic and horticultural best practices by jamming plant in between chunks of concrete, using alkaline gravel instead of soil and never irrigating Surprisingly, this allows you to expand the pallet of fascinating plants that can be grown in the region.

John Cho was introduced to the ornamental side of elephant ears in 2003 when Tony Avent visited him at his experiment station on Maui. Tony’s knowledge of taro grew greatly that day, but so did John’s knowledge since he wasn’t aware of the ornamental traits of Colocasia esculenta. In the months that followed, John and Tony established a formal relationship to breed ornamental elephant ears. In this presentation, John will discuss the processes involved in breeding his Royal Hawaiin Collection of elephant ears.

"Plantdemic in the Far Reaches"
Kelly Dodson and Sue Milliken

Staying at home among the rare, the gorgeous, and the botanically interesting.

Stroll through Dan Hinkley's Gardens of Windcliff as he shows us some of his favorite plants and tells us fascinating stories about them. Knowing Dan, these plants are sure to impress.

A whole load of great plants, in the wild and in cultivation. Some very special things that inspire me; new, old, cutting edge; a plantsman's choice.

"The Land of Ahs"
Jimmy Turner

The flora of Australia is a truly a different world. Jimmy will be showing familiar and some not so familiar plants from the “Land Down Under” that with some future plant breeding and selection may someday actually survive in our part of the world. Prepare yourself for serious #PlantLust, and know in advance ... no, these plants aren’t available here yet.

Tony Avent is the owner of Plant Delights Nursery and Juniper Level Botanical Gardens in Raleigh, North Carolina. Plant Delights Nursery, an international retail mail order nursery, serves as the public face of Juniper Level Botanic Garden. Their mission is to discover, study, select, and make available new perennial plants for both shade gardens and sun gardens around the world. Since 1994, they've taken over 60 botanical expeditions and sponsored many more, both domestic and worldwide in their quest for great new plants. While the nursery offers over 1,600 different perennials at any one time, this represents only about 10% of the living plant collections featured in the gardens. The mission of Juniper Level Botanic Garden is one of aesthetic display of ornamental plants, ex-situ plant conservation, plant evaluation, plant identification, plant exploration, plant propagation, and education about the diversity of ornamental plants from around the world. Their emphasis is southeast U.S. natives, especially those of conservation concern and those whose horticultural desirability make them targets of unscrupulous collectors who decimate wild populations by selling wild collected plants.

Tony is a 1978 graduate from the Department of Horticultural Science at NC State University. After graduating, he became the landscape director at the NC State Fairgrounds. From 1985 to 1994, he was the volunteer curator of the Shade House (now the Lath House) at the North Carolina State University Arboretum. In 1987, Tony began his popular weekly garden column in the News & Observer which he continued for 11 years. Tony is an international plant explorer and has visited Argentina, China, Crete, Mexico, South Africa, South Korea, Taiwan, Texas (five expeditions), and Thailand and Vietnam and has explored the Southeast 43 times. He's a prolific hosta hybridizer and freelance garden writer and lecturer (over 640 lectures since 1990). He serves on many committees including the USDA-ARS Hardiness Zone Map Revision Advisory Committee, North Carolina Department of Agriculture Plant Conservation Scientific Committee, and the Woody Plant Advisory Committee and the Symposium Committee at the JC Raulston Arboretum. He's a contributing editor for Horticulture magazine and was an invited participant in the St. Louis Summit, a workshop on linking ecology and horticulture to prevent plant invasions.

John is known as the plant breeder of the Royal Hawaiian Collection of ornamental elephant ears, having patented the cultivars 'Maui Gold' and 'Hawaiian Punch', 'Black Coral' and 'Hilo Magic', among many. Although many of us think of Colocasia as an ornamental plant, taro (Colocasia esculenta) is a critical source of food and a staple in many parts of the world, including the Pacific Islands. John, a retired plant pathologist at the College of Tropical and Agriculture and Human Resources (CTAHR) at the University of Hawaii, Manoa, was one of a team partnering with county officials and taro farmers to breed a more disease resistant taro in the Kauai region in the 1990s. From that breeding program came two that do well in Hawaii and in Puerto Rico, providing crops for both regions' farmers. He also acted as an agricultural consultant in the Dominican Republic for three years, helping to develop management strategies for the taro leaf blight disease.

Kelly Dodson and Sue Milliken met as members of a seed collecting expedition to Yunnan in 1997. This shared passion for plants that are important botanically and of merit to collectors and niche gardening led to them combining their life efforts on six acres in Port Townsend, Washington in 2000 and the rare plant nursery Far Reaches Farm came into fruition shortly thereafter. They have participated in a number of overseas plant hunting expeditions in collaboration with the Rhododendron Species Botanic Garden thanks to a continued connection from Kelly's years there as propagation and nursery manager. Their lifetime embodiment of plant knowledge and a long history of cultivating and conserving rare plants led them to the formation of the nonprofit, Far Reaches Botanical Conservancy, an organization dedicated to plant introduction and conservation.

Dan Hinkley, born in the Zone 4 highlands of North Central Michigan, has had a lifelong interest in plants, leading him to receive his B.S. in ornamental horticulture and horticulture education from Michigan State University in 1976, and his M.S. in urban horticulture from the University of Washington in 1985.

In 1987, while teaching horticulture at Edmonds Community College north of Seattle, he and his partner, Robert L. Jones, began Heronswood Nursery, near Kingston, Washington. Devoted to introducing rare and unusual plants to gardeners of North America, this endeavor has led Dan into the wilds of China, South and Central America, Mexico, New Zealand, South Africa, Nepal, Vietnam, Taiwan, Sikkim, Bhutan, Tasmania, and Canada numerous times a year for the past 22 years. Heronswood Nursery previously listed nearly 3,000 plant species, and has shipped to 48 states as well as England, Europe, and Asia. When W.A. Burpee closed the garden and nursery in May of 2006, Dan independently focused his attentions on continued plant hunting, writing, and speaking.

His first book, Winter Ornamentals, was published in 1993 and his second, The Explorer's Garden: Rare and Unusual Perennials, received the 1999 Book of the Year Award from the American Horticultural Society. His third book, released in May of 2009 and the second in a series of three, is titled The Explorers Garden: Shrubs and Vines from the Four Corners of the World for which he received the 2010 Book Award from the American Horticultural Society.

In 2003, Dan was honored with the Scott Arboretum Gold Medal from Swarthmore College in Pennsylvania for his lifetime achievements in horticulture. He has been awarded the Marcel Le Piniac Award from the American Rock Garden Society, the Medal of Honor from the Garden Club of America, the Garden Communicator of the Year award from the American Nurserymen and Landscape Association, the White Gold Medal from the Greater Cleveland Horticultural Society, and in 2006, the Liberty Hyde Bailey Award from the American Horticultural Society for a lifetime of achievement in education, writing, and plant exploration. He received on June 21, 2007, and July 2, 2007, respectively, the George Robert White Medal of Honor from the Massachusetts Horticultural Society for the advancement of interest in horticulture in the broadest sense; and from the Royal Horticulture Society of Great Britain, the Veitch Memorial Medal for his outstanding contribution to the advancement of the science and practice of horticulture. In March of 2008, Dan was appointed to memberships of the boards of both the Elisabeth C. Miller Botanical Garden Trust and the Elisabeth C. Miller Botanical Garden Endowment Trust. In 2010, Dan was presented the Perennial Plant Association Award of Merit for contributions to the advancement of the perennials plant industry through lectures, writing, and plant exploration.

Dan Hinkley currently resides in Indianola, Washington, where he is in the process of realizing his latest endeavor, the Gardens of Windcliff, on a south-facing bluff overlooking Puget Sound; and writing his third book for Timber Press in the Explorer’s Garden series.

Nick trained as an arborist originally, but went straight into horticulture after college and after a couple of years running a large garden in the Cotswolds, U.K., opened Pan-global Plants, a nursery specializing in the rare and desirable. Twenty-three years later the nursery has an international reputation and an enviable clientele, selling to the greatest gardens in the United Kingdom and Europe, both public and private. Nick has traveled the world over the last twenty years, botanising the wild places, and continues to do so, usually twice a year. He speaks regularly in the U.K. and sometimes internationally.

Jimmy Turner is a self-proclaimed obsessive plant geek, garden writer, and lover of all things horticultural. Recently appointed as Executive Director or Red Butte Garden in Salt Lake City, Utah. The largest botanical garden in the Intermountain West and together with the University of Utah, is a state arboretum.

From 2013 to 2019, Jimmy was the director of horticulture operations for the Royal Botanic Garden Sydney, the Blue Mountains Botanic Garden Mount Tomah, the Australian Botanic Garden Mount Annan, Centennial Parklands and Moore Park. Previously, Jimmy enjoyed over a decade as the senior director of gardens at the Dallas Arboretum and Botanical Garden in Dallas, Texas, where he honed his skills in horticultural displays. Whilst there, he created the largest and one of the most successful plant trial programs in North America. You could often see him on local, state, and national news programs sharing his horticultural knowledge with humor and zest.

A native-born Texan who has worked in many fields across horticulture including farming, wholesale and retail nurseries, landscape design and maintenance, and botanical garden management, Jimmy received his M.Sc. in ornamental horticulture from The Pennsylvania State University. He considers horticulture to a calling, not a career, and is known for his fast-talking, passionate, and enthusiastic presentations.

He is known for having a flair for increasing visitor engagement with horticultural display by using “out-of-the-pot” thinking to increase awareness of plants. His vision has been realised recently in the award winning “Plants With Bite” carnivorous plant exhibition in the Calyx at the Royal Botanic Garden Sydney.

Jimmy has become a social media influencer with one of the largest horticulture-based Twitter followings in the world. You can find him at @TexanInOz to share in his plant obsessions.

Cost
$50.00
Registration
Advance registration is required. Please register online using our registration e-store. Registration is limited and is considered complete when payment is received.
Cancellation
Program cancellations can be made up to two weeks before the program's start date. A 15% cancellation fee applies.
Location
Online via Zoom. Instructions will be provided by e-mail.
Questions
Please contact Chris Glenn at chris_glenn@ncsu.edu for more information about this symposium. 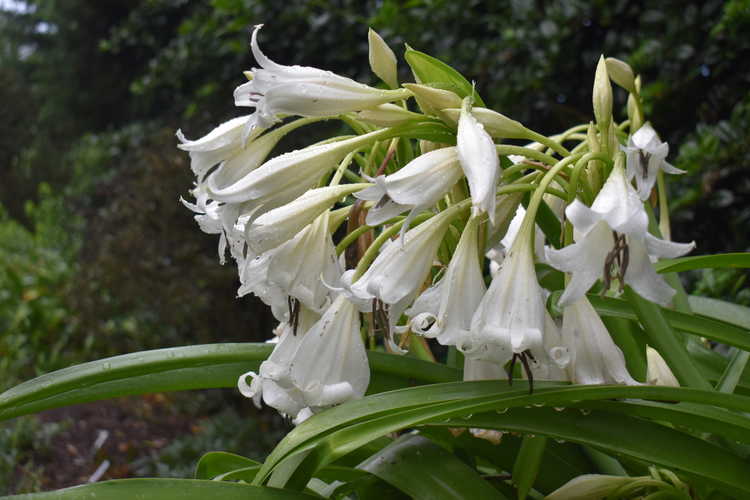 The Foodscape Revolution—Practical Solutions for Growing Your Own Food in the Southeast
Brie Arthur, Author, Horticulturist, and Lifelong Home Gardener
6:30 pm